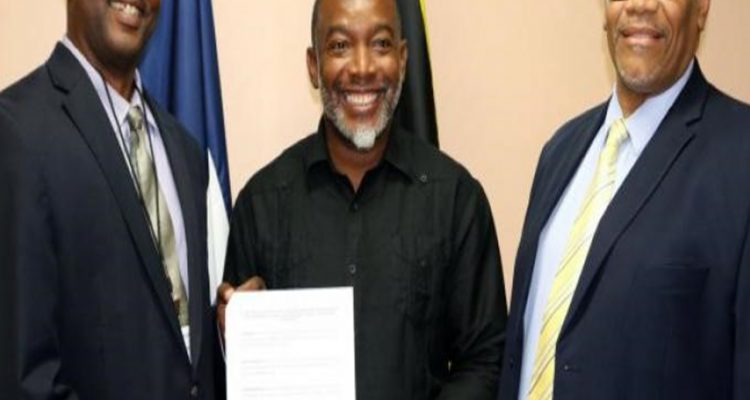 Montserrat deposited its instruments of ratification of the Agreement Establishing the Caribbean Centre for Renewable Energy and Energy Efficiency (CCREEE), on Tuesday. The CARICOM Member State became the fifth Member States to do so, effectively paving the way for the establishment of the Centre’s legal identity by mid next month.

The Hon. Paul Lewis, Montserrat Minister of Communication, Works and Labour, handed over the document to Mr. Joseph Cox, CARICOM Assistant Secretary-General, Trade and Economic Integration, during a Special Meeting of Officials of the Council for Trade and Economic Development (COTED) on Energy.

Energy officials and partners began gathering at the CARICOM Secretariat in Georgetown, Guyana, in preparation for the Special COTED Ministerial Meeting on Thursday, also at the Secretariat.

The Agreement, which was opened for signature at the Thirty-Eighth Regular Meeting of the Conference of Heads of Government of CARICOM in Grenada in July 2017, established the CCREEE. The Centre is intended to function as the implementation hub for the CARICOM Energy Policy, as well as the Caribbean Sustainable Roadmap and Strategy (C-SERMS).

The CCREEE is among the matters on the table at the Meeting. Ministers are to assess a report on its interim operations. In 2015, CARICOM Heads of Government had approved the establishment of the Centre and had identified Barbados as the host country for its Secretariat. The COTED agreed to interim operations of the Centre in January, 2016. The Ministers will consider steps towards the transition from interim phase to the first operational phase of the Centre, and are also expected to make decisions on the Centre’s Executive Board and Executive Director.

Progress on the Regional Energy Efficiency Building Code (REEBC); the Minimum Energy Performance Standards (MEPS) for cooling devices such as air conditioners, refrigerators and freezers and luminaires; and Energy Standards and Labelling for Electrical Appliances, are also on the agenda of the Meeting.

The Ministers will also assess the progress on the C-SERMS. They will hold discussions on integrating climate change adaptation within the Strategy against the background of the Region’s vulnerability to intense climate-related events.

Regional energy security, and ways in which Member States can cooperate in the area of oil and gas exploration, are among other matters the Ministers will discuss on Thursday.