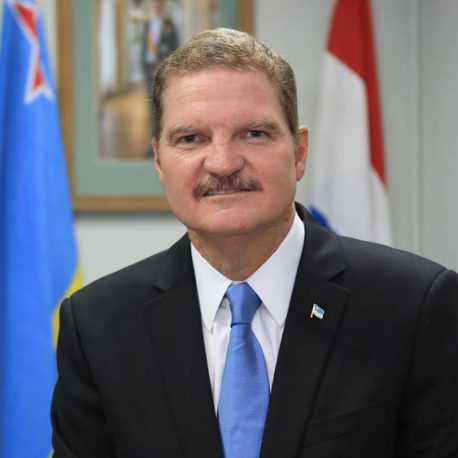 Mike Eman is an Aruban politician and civic leader, who served as the Prime Minister of Aruba from 2009 to 2017. In the 2009 election, Mike Eman led his party, the “Arubaanse Volkspartij” (AVP), to a historical victory winning a majority of 12 of the 21 seats in the Aruban Parliament. In the 2013 election, he again led his party to victory, increasing the party’s majority in Parliament to a record 13 seats. He has received the most popular votes of any political candidate in Aruba in every election held from 2005 through 2017. Entering office as Prime Minister in 2009, Mike immediately confronted a formidable challenge to Aruba and its economy – a deep global recession. He implemented a bold rescue plan as part of a broad agenda to revive the economy, to improve relations with the Kingdom of the Netherlands and to promote the worldwide brand of Aruba as a country that is stable, democratic, and innovative. He renewed and strengthened his government’s relations with its stategic business partners. Through his efforts, companies central to Aruba’s economy returned; KLM resumed its flights between Amsterdam and Aruba, and Carnival Cruise Lines began visiting Aruba again after a long absence. In rescuing the economy, he also transformed it through his vision of sustainable and shared prosperity that put Aruba on the path to renewable energy, a diversified knowledge-based economy and a stronger sense of community and social cohesion. He is passionate about Aruba moving to greater use of renewable energy and pursuing a strategy of sustainable development. As Prime Minister, he attracted some of the leading strategic partners in the world to help Aruba transition off fossil fuels, including Sir Richard Branson and the Carbon War Room, and the Rocky Mountain Institute, among others. The United Nations, the U.S. Government and others recognized Aruba as a role model for the region. The United Nations selected Aruba as the site for the U.N. Centre for Excellence for Sustainable Development of Small Islands and Developing States (SIDS), a platform to exchange knowledge among SIDS on sustainable practices in a number of areas. Mike became a strong voice internationally on the climate change threat facing SIDS, speaking at several international venues, including the U.N. Security Council. To promote a knowledge-based economy, Mike brought another strategic partner, the Dutch Organization for Applied Scientific Research (TNO), to Aruba. Together, Aruba and TNO diversified Aruba’s economy by giving Aruban engineers a platform to export to the region the local knowledge and lessons Aruba had gained in its transition to renewable energy. As Prime Minister, he was determined that social gains must keep pace with economic gains in Aruba. As an avid student of the philosophy of communitarianism, he understood the connection between the individual and the community, and the importance of community relationships. He made many improvements in the quality of life for Arubans and visitors alike through his urban renewal vision for revitalized city centers, improved public housing, a tram system from Aruba’s port to the city of Oranjestad, the world’s largest linear park and the Green Corridor, an innovative Public-Private Partnership to build a four lane highway and to improve the adjacent residential areas. His vision for sustainable and shared prosperity gained substantial recognition for Aruba worldwide, and he has shared Aruba’s experiences with audiences at several prominent universities and institutions, including Harvard University, Massachuetts Institute of Technology, Georgetown University, The Earth Institute at Columbia University, New York University, Inter-American Dialogue and TEDxBinnehof in The Netherlands. He is a 1992 graduate of the University of the Netherlands Antilles (UNA). He pursued further studies at the UNA, and in 1996 he graduated in Netherlands Antilles Civil Notary Law.